Other things I love? Witches and bad decisions. Image from the BotanyShitPosts Tumblr
.

We are, after all, not nearly as smart as he is.

It wasn’t the look that hooked you; you’ve seen that look lots of times. It was the closet door. The one in the back of his apartment, the one with the steel hasp and the shiny steel padlock. The one you’ve never seen open, the one he’d only smile about if you asked one of those nights you slept over with him. 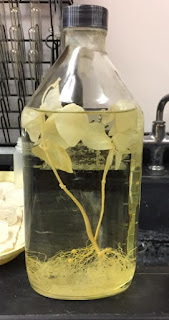 Not only that, it seemed to be … glowing. That’s impossible. Who puts a light in a closet? Unless he’s growing weed in there, but there’d be no need to keep THAT a secret from you.

“This’ll be great.” You took a seat on the bed as he paced the short length of the bedroom, your eyes constantly drawn to that open door. He was all jangly limbs and frenetic energy and piercing blue eyes, dressed in a threadbare band-logo T-shirt and a pair of hundred-dollar jeans. Yeah, Mike was Mike and this was shaping up to be a classic Mike type of evening.

“Look, most of this happened before I met you and I didn’t know if it was real or it would work, but couple years ago I got a real apprenticeship with a real witch.”

The hinges on your jaw loosen as you try to formulate a response. “A… witch?” That was a response. You feel dumb, the way he always makes you feel dumb. One of these days you’ll be quick enough to keep up with him. Today was not the day.

“Yeah, they’re still around. They mostly only take other women, but, well, you have to know how to talk to them. About balance and harmony and all that. And find the right one who’se old enough and alone enough and fears the things she knows will die with her if she can’t pass them on. It takes some looking, but you know me. I’ve always been good at looking. And good looking.”

You smile weakly. The joke may be wearing thin, but part of you will always remember the awkward confidence with which he made it the first time. There’s an eager little boy in there somewhere, one both proud of himself and eager to please and quick as lightning. You fell in love with that little boy, even if the same old jokes are starting to run thin.

And now, the moment .He steps in to the closet, comes out with several two-liter bottles, with some kind of plant growing in each. Deep emerald-green leaves, rich brown roots. Strange sigils are etched onto each bottlecap in what appears to be black sharpie. “Watch this!” he says, then mutters a few words under his breath. The air in the apartment suddenly feels clearer, healthier. Even a bit brighter. Certainly cooler and less humid. “See? Environmental control. Temperature, humidity, spirit. We’ve been cooling our air with clunky nineteenth century technology for too long, compressing gasses and letting them decompress. IT’s time to move to the future!”

You are genuinely amazed, your head feels clearer. Clear enough that something here seems wrong. “What did your witch say about this plan?”

He waves a hand dismissively. “You know witches. Always playing it safe. Too meddlesome. To big a risk. Too harmful.”

As he talks the bottleplant fades before your eyes, from a lush green to a muted tan. He sees your looking. “They always do that, but it’s fine. We can always recharge them, take a little from the world outside. Even from the ocean. Nobody’ll miss it.”

“Nobody?” You stand up and look him in the eye. “You sure about that?”

He smiles, nods equally. “Nobody. Just take a little energy, release a bit of psychic waste. Maybe into the ocean. What’s a nightmare or two to a fish? And we’ll all get to be happy and comfortable.” He pauses. “I’m gonna need investors.  Capital. We’re going to be rich!”.

You take a deep breath of the cool, dry, spiritually cleansed air. To be rich with him would be good, right? And worth putting up with the same old jokes for a few more years.

Maybe this time he got it right.

In the closet, the remaining plants fade to grey.