Blog Hop! Gnat's Story, part the 8th. In which Gnat meets and old friend and learns a secret


Blog hop story time! Another collaborative story, continuing the adventures of "Gnat". Time travel and intrigue in this one.

Part 8 - The Secret of Time Travel


There was another figure in the darkness, but Gnat couldn't make him out; years on the street had honed her senses, attuned her to danger, and danger was here. Their voices sounded reasonable, calm, but there was something sharp, angry, tightly coiled within them. Beneath reasonable voices asking how much longer until they found the key was anger, barely held in check. Gnat closed her eyes and took a deep breath. She had to find someplace safe.

Something shifted. Gnat opened her eyes to the most empty room she'd ever seen; blank white walls, an off-white carpet and no doors or windows. The lack of means if ingress or egress, the confusion about where she was and how she got here would have been the most deeply shocking elements of the experience were it not for the room's other occupant. An small, iron-haired woman, some indeterminate age between fifty and a hundred sat half-lotus on the off-white carpet. The face was older, yes, but unmistakable.

Decades older, yes, but the eyes which met Gnat's were her own. What more had those eyes seen? What did they think of her younger self?

Younger Gnat closed her eyes and took a deep breath. "It's true. I do learn the secret of time travel."

Her older self nodded. "Soon. You'll learn it soon."

The younger woman felt the muscles in her jaw tighten. She realized that ever since Freddy found her in the hotel room she'd been lead by people with agendas, people with secrets, people who knew more than she did. Even herself. She took a deep breath, looking for calm that wasn't there. "Then why the fuck didn't you go back to the fire? Why didn't you save them?"

Gnat was trembling with rage. "Look, I don't know when I learned to talk in riddles, but I don't like it. If you haven't gone back, take me to the damn time machine and send me back so I can fix it. Now."

The older woman - Gnat started to think of her as Naomi - sat silent for a moment. The faintest hint of a smile touched her lip but didn't quite reach her eyes. "That's part of the secret. There is no 'time machine'. Just this." She tapped her temple with two fingers. "Once you understand, you'll understand. And can, sometimes, make the trip."

That was rather a lot for Gnat to process. With so many questions, she keyed on the one most striking word. "Sometimes?"

Naomi nodded. "It's complicated. I was able to get you because, well, you're me. And there are some times and places I can go myself. And some, sometimes... well, it can be dangerous. You'll be using your mind in ways it wasn't meant to. I think that's part of what happened to poor Freddy."

There were still so many questions, but Gnat was afraid to let her older self off the hook. "The fire. I need to."

Naomi's eyes met hers. It might have been Gnat's imagination, but there seemed to be a hint of a tear - remembering? Or guilty about having not gone herself? Without another word, she reached forward and touched Gnat on the brow. The room faded...

...and opened to choking smoke, orange-hot flame, and the screams of dozens of women. "Fire on the eighth floor! Fire" screaming and vague sinister shapes barely seen through the smoke, engines and machines and broken glass and yelling and burning in her lungs and yelling and the shattering of glass and sickening thud of a body on pavement and

Gnat's childhood bedroom and Gnat's own voice - her much younger voice - screaming and still the smell of smoke. Someone yelling for Mr. Blank. And, in the bedroom, from nowhere, flames. The young Gnat sat bolt upright, hair matted with sweat yelling "save them... fire on the eighth floor.. save them" and the flames rose and they spread and young Gnat (still Naomi) got up from the bed and ran and the flames rose and there was nothing but smoke

..and she was back with her older self, in the empty, featureless room. There were certainly tears on Naomi's face now. "So now you know."

"Know what? You were supposed to take e before the damn fire started. You were too late."

Naomi shook her head. "I'd had a lesson at school that week about the Triangle Shirtwaist Factory fire, a century before.  It gave me nghtmares."

"I hadn't remembered that. I thought the nightmares were from my fire."

Naomi shook her head sadly. "You have it backwards. The fire is from our nightmares. The stress on the word caused by time travel, the power of your mind... That's another part of the secret." 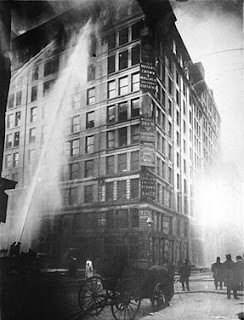 Gnat felt the sane numbness she had right after the fire. It seemed too much to be real, too big for her even to build feelings around. She sat heavilly to the floor. "so.. what now? Freddy will miss me soon, won't he?"

Now Naomi chuckled with real warmth. "This is time travel. Freddy last saw you years ago. Or seconds ago. There's no difference. We have time."

Now the older woman's smile was broad, revealing deep laugh-lines around her eyes. "For  me to teach you the secret of time travel, of course. How do you think I learned it?"

"But.. if I learned it from you, and you know becuase you're me.. where did it come from?"

All part of the secret, darling.  And Naomi taught herself, for a long time hidden between ticks of the clock.

All the while, part of Gnat wondered if there was another secret hidden behind this one, one that she was hiding from herself. She was, after all,  good at reading when people were hiding something,