In my apparent inability to shy away from cool-sounding projects, I've joined the talented Carrie Sorenson, Nicole Pyles, Yolanda Lane, and Tena Carr for a pass-the-story collaborative effort. Part four ended in quite a cliffhanger, as our heroine discoverd... something. There's a tendency on these kinds of stories for people chapters to end right before an answer to some question, with the next participant having the pleasure/responsibility/option of giving the big reveal. With the story only half-over (we'll each get one more turn) I can't reveal too much, but to be fair to the reader we need to give something.

See earlier parts the first, second, third, and fourth (and, despite this being a time-travel story, I suggest you read them in that order):

And now, without further ado:

She was in a study or an office, dominated by an ornate desk of some kind of dark wood surrounded by stacks of notebooks and papers hapharzardly strewn about. There it was, carelessly thrown under the desk; a cheap, tiny notebook of the sort grade-school kids buy in Septembers and discard in June if their houses aren't burned down under mysterious circumstances. The pages were yellow with age, the binding crumbling, and the cover marred by an uneven crease - the same crease across the cover of the powder-blue notebook tucked into Gnat's pocket. A torn-off corner revealed a pen-and-ink drawing on the page below.

A wave of heat flowed through Gnat's chest and into her throat, Tyler's voice encouraging her to keep looking came from very far away, past ringing ears and a rush of vertigo as the floor seemed to twist under Gnat's feet. She sat heavily on the floor under the desk, and remembered.  Not the flame, but the time after in faux-homey offices with a fatherly looking bearded man with a notebook and a leather chair and questions and a notebook and not the flame but its memory and a notebook.

Gnat's first set of foster parents had believed in therapy, believed in her needing a sympathetic ear after what happened. At least for the first few weeks, until the trauma faded into the past and the forty-dollar-a-week copays started to add up. Dr. Blintain was a nice man, a gentle man, a bit like young Gnat's idea of what a college professor would look like. Or, for that matter, how a headshrinker should look. He listened a lot, asked a lot of questions about what her foster parents were like and what she thought about them and how she felt when she thought about her family and how she felt now. It was the last session - the last forty-dollars that her foster-mother would pay for Naomi's sanity - when Doctor Blintain finally helped her find the words for what was wrong in her life.

"My parents, my room, our house, my brother, they were all mine. They were me. And now, I'm, like, sharing. It's like I'm snatching bits and pieces of other people's lives and they aren't me."
Dr. Blintain handed her a little pocket composition notebook. He didn't slide it across the table, didn't toss it to her. He really handed it to her. His fingers might have even brushed against hers. "Make some space for yourself. Write poems. Draw pictures. However you want to express yourself, just do it. Consider it your therapy homework."

Gnat shook her head. "But I'm no good at any of those things."

"Not the point. Even if nobody else sees it, this can be your private space. Something yours."

That was her last session, and she was rarely without a notebook since. The little memo pad Dr. Blintain had given her, spiral books, marble composition books.   Even on the streets she'd buy one with rare saved-up pennies or, in desperation, shoplift them. The first thing she drew in that first notebook was the flame-imp; a malevolent little sprite that set fire to houses and killed families. It was short and twisted and hateful, with little lightning bolts in its eyes and crooked limbs. Drawing it made her feel less aweful about the fire, helped her forget the truth that there was no imp, but...

That didn't matter now. Now, in the present, she saw this impossible notebook with the half-torn cover. And underneath, in the visible page, was the imp.

As her head cleared, Gnat heard Freddy speaking to Tyler outside the room. "I knew this wouldn't work. It's desperate and crazy. Look at her." 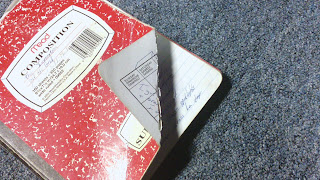 Gnat carefully, surreptitiously palmed the little notebook as she stood up, tucked it into her pants alongside its twin. "I'm OK guys... just a little lightheaded. This is alot for me."

She slowly made her way room to room, her mind racing. What could she point to them that would satisfy them, at least long enough for her to read through that notebook herself. Because once she saw the imp's leering face, she knew she'd not share it. At least not right away.

She made sure to visit four more rooms, carefully looking under furniture and behind curtains for something she knew wasn't there. Finally, she came to a bedroom. Half-hidden under a bed was a snowglobe. Hrm.. complicated enough to hold a message, delicate enough that they might not crack it open right away... yes, this would give her some time to think.

Freddy fixed her with a hard stare. "That? What do you think that is?"

Gnat swallowed. She knew he'd see through him; she just knew it. Still, she thought she knew the right answer. "It just feels right. It feels like it's a ... a message."

Freddy gingerly took the snowglobe from her hands, turned and gave it to Tyler.

His fingers did not brush against hers.